Camp is a place of stories. 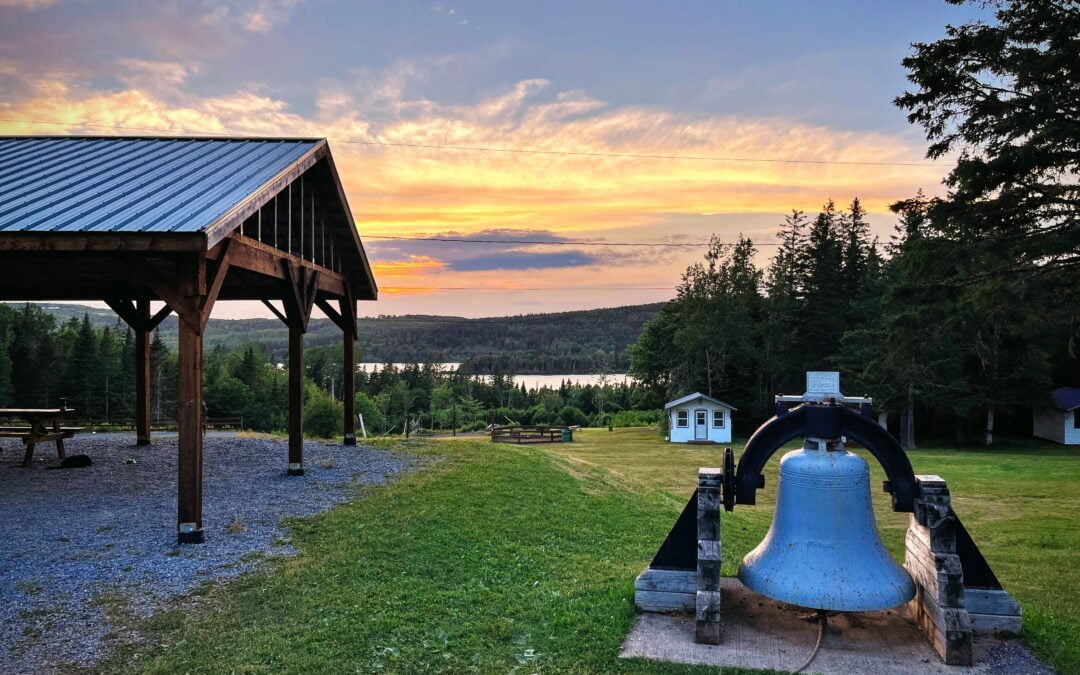 Last week, my family spent the week at Camp Tulakadik where I was the camp pastor. Like many pastors and other Christian leaders, I have been significantly impacted by my own camp experiences, and I’m grateful to support the work of my local camp and promote the ministry of all of our camps.

Centrally located at Camp Tulakadik is the bell, rung to announce the change in programs, meal times, and also to spontaneously do the wingnut (Not sure what that is? it’s best to visit the camp and ask a staff member).  The bell has been prominent at the camp for a long time – it’s featured in photos dating back decades.  It invited me to wonder what stories it could tell.

I found myself wondering this week – how many times has that bell been rung?  How many campers have heeded its ringing?

“Camp is a place of stories.” (Jacob Sorenson, Sacred Playgrounds)

Camping ministry is a significant element of next generation ministry in Atlantic Canada.  As the CBAC, we are proud to have several camps scattered around our region, where thousands of campers and staff gather every summer.

As I spent time at camp last week, I read Jacob Sorenson’s Sacred Playgrounds (which happens to be the textbook for the camping ministry course offered through ADC this fall).  Sorenson writes about five characteristics of camp ministry, and it was significant to be reading about these characteristics, while witnessing them lived out in real time.

In particular, I paid attention to the participatory characteristic through the eyes of the campers (including my own children). I loved hearing the stories from campers of their new experiences – of the opportunities they had that day to try something new.  There were campers who swam into the deep end of the pool for the first time, others who climbed to the top of the rock wall, and one camper who was excited to show me the salamander he had found.  As they shared in these experiences, the campers created community.

When my son woke up on Saturday morning after we had returned home, his first words to me were, “I can’t believe the week is over already.  When can I sign up for next year?” His desire for the community he formed was expressed in his follow-up statement to have the same cabin leaders next summer.

Something transcendent happened in that week, and my son longs to recapture it.  While that week-long experience will not happen again, he does recognize the significance of that place, and he longs to return to Camp Tulakadik.  He knows that he encountered the nearness of Christ, and the beauty of meaningful community. Camps offer an experience that many of us long for, and yet, will never attain in our churches.

It is not easy to operate camps in this era, and a trend has occurred in which many of our churches have distanced themselves from our camps, often leaving camps as “islands of faith.” We see youth and young adults who will spend summer after summer at camp, while not regularly plugged into our churches.  This is not a failure of our youth, or even our camps, but ultimately is a failure of our churches in not supporting camps and seeing their value.

Sorenson writes, “We do not need islands of faith. We need bridges and interconnected webs of faithful interaction among ministries.”

This year, I entered a new decade and turned 40.  My own children are now quickly approaching the age of camp staff, meaning that as the camp pastor, I was frequently the only “adult” in a space filled with dozens of children, teens, and young adults.  I was reminded of the great responsibility we place in the hands of 16 and 17 year olds all summer long, all over Atlantic Canada.  I also lamented the reality that come September, we will expect them to relinquish that responsibility and go back to only being “young people” in our churches. We will miss out on their wisdom and experience; we will fail to invite them to share their stories and we will miss out on hearing how the kingdom of God came close in Atlantic Canada.

I encourage you to consider how you can be supporting your local camps.  Invite the directors and staff to speak on Sunday mornings.  Pray regularly for the camp, and dream with them how you can build bridges and inconnected webs of faithful interaction.  What children can you sponsor to send to camp next summer (or even this summer!)?